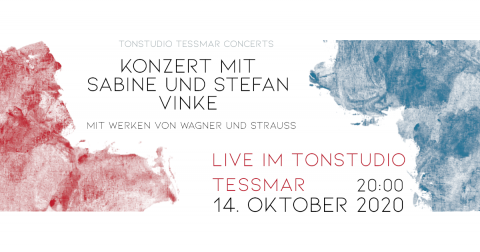 with works by Richard Wagner and Richard Strauss

Usually big names can only be found on big stages - as is the case with the Vinke couple. Star tenor Stefan Vinke would have played on stages in New York, Bologna, Barcelona, ​​Paris, Bayreuth and Brisbane this year, but unfortunately the Covid 19 pandemic prevented these concert plans. Together with his wife Sabine Vinke, also a highly esteemed soprano in the youthful-dramatic field, solutions were sought and found. Without further ado, the Vinke couple organized part of the Wagner Festival in their own garden - and were able to reach up to 150,000 people worldwide. Just one example that shows what new opportunities arise from this special time.

Booking such top-class acts for our small concert series is normally out of proportion, but as described there are exciting opportunities at the moment. And so we are delighted that we and the Hanoverian pianist Christian Zimmer were able to win the Vinke couple for an exclusive and intimate concert in our recording room.

The concert will be streamed online worldwide via live stream (October 14, 8:00 p.m. Central European Time). Further information on dialing in will follow in the coming days.